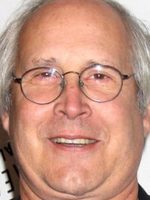 Chevy Chase was born in Cornelius Crane (Low Manhattan, New York). His mother was the pianist Cathalene Parker and his father was the writer Tinsley 'Ned' Chase. His ancestors came from England, Scotland, Ireland and Denmark. His grandmother gave him his name, who usually called him 'Chevy' when he was two. Chevy Chase rolled at Saturday Night Live (1975-1976). it was the beginning of a succesfully career. His greatest hit was 'Caddyshack' and 'Fletch Lives', both of them at eighties. In this time he was known as a good comedian. Since nineties his popularity decrease as a consecuence of featuring on films like 'Memoirs of an invisible man' or 'Cops and Robbersons'.

Chevy Chase has been active for 37 years, participating in 9 movies that average a 5.2/10 score.