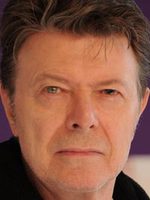 David Robert Jones was born in Brixton, London, on January 8th, 1947. He was known by his artistic name: David Bowie. He was one of the biggest examples of a whole artist: he was a singer, musician, composer, producer and actor. He began his career in the 60s, and his first hit was 'Space Oddity'. In the 70s he became the image of glam music thanks to his alter ego Ziggy Stardust. He has very well known hits like 'Heroes', 'Ashes to Ashes' or 'Let's Dance'. He debuted his last album on January the 8th, 2016, the day of his 69th birthday. It is titled 'Blackstar' and became his last work, because he passed away two days later. He got married twice. Somalian model Iman was his wife till his death, victim of a cancer. He had a son from his first marriage, movie director Duncan Jones, and a daughter from his second marriage, Alexandra Zahra. In movies he was known for his roles in 'The Hunger' and 'Merry Christmas Mr. Lawrence'. But his biggest role was Jareth, the king goblin of 'Labyrinth'. He entered the Rock and Roll Hall of Fame in 1996 and he announced his retirement in October 2015.

Before passing away, David Bowie worked on 5 movies that average a 7.5/10 score.

The Man Who Fell To Earth