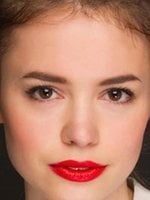 Guiomar Puerta is a Spanish actress born in 1992 who worked on the 21st season of 'Goenkale', the longest-running Basque series on Spanish television. In addition to being part of projects such as' Carlos, rey emperador ', '45 revoluciones' or' Paquita Salas', among others.

Guiomar Puerta has been active for 1 years, participating in 1 movies that average a 5.7/10 score.