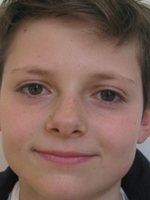 Louis Ashbourne Serkis is a young actor who has worked in films such as ' Alice Through the Looking Glass', 'Mowgli', directed by his father, the actor Andy Serkis, and 'The Kid Who Would Be King'. He has also participated in six episodes of the series 'Taboo'.

Louis Ashbourne Serkis has been active for 5 years, participating in 3 movies that average a 6.0/10 score.

The Kid Who Would Be King

Alice Through the Looking Glass