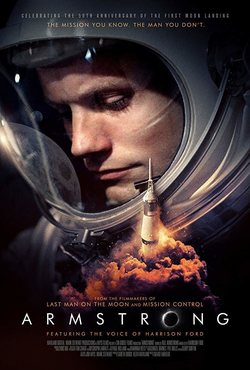 'Armstrong' is a 2019 documentary, released fifty years after man first set foot on the moon, celebrating the history of space travel and one of its most iconic figures: the legendary astronaut, Neil Armstrong. The documentary delves into the man behind the space helmet, interviewing his first wife, Janet; his sons, Mark and Rick, and his sister, June, to paint a picture of Armstrong's life, beginning with his childhood in the tiny town of Wapakoneta, Ohio. The documentary explores how Armstrong's interest in airborne travel went from a childhood fascination with model airplanes to his time spent as a pilot in the Korean War, and ultimately to joining NASA's astronaut program in 1962, in which he was one of only two civilian pilots to be accepted onto the competitive course. Using archival footage alongside these interviews allows the reader to rewatch these iconic moments with commentary from the people who knew Neil Armstrong best. As Armstrong himself passed away in 2012, Harrison Ford reads the voice over that frames the documentary, including words from Armstrong himself. 'Armstrong' is directed by famed documentary maker, David Fairhead. Fairhead's other works include 'Spitfire', 'The Long Journey Home' and 'Missing Control: The Unsung Heroes of Apollo'.

?
Write your own 'Armstrong' review.