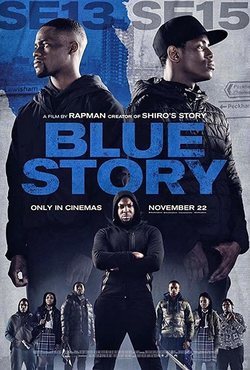 'Blue Story' is a tragic story that will focus on the friendship between Timmy (Stephen Odubola, 'The Legend of Tarzan', 'Lost in Mozart') and Marco (Micheal Ward, 'Lily Allen feat. Giggs: Trigger Bang', 'Tom Walker: Blessings'), two young people from completely different neighborhoods. Timmy is a shy, very intelligent and naive boy from the Deptford neighborhood, who goes to school in Peckham, the place where he begins a friendship with Marco, a very charismatic and very street boy who lives in the local area. Despite the differences that loom over the two protagonists, Timmy and Marco quickly form a loyalty until they finally end up on two rival sides in the middle of a street war. 'Blue Story' is a film directed and scripted by Andrew Onwubolu, better known as Rapman, a rapper born in the United Kingdom, who in addition to dedicating himself to the musical field, is also known within the cinematographic world, for being an actor, director, producer and screenwriter. Onwubolu has had as an actor in films such as 'The Antwert Dolls' or 'The Ellington Kid', and through 'Blue Story' shows many situations of his childhood, as well as personal experiences that have happened over the years. In the movie Rapman intervenes singing too.

?
Write your own 'Blue Story' review.

During its UK opening weekend a riot occurred at a VUE cinema in Birmingham, England, in the middle of a screening. Over 100 people were allegedly involved, including young teenagers armed with machetes. The area was put under lock-down by police armed with tasers. As a result of the riot, VUE (and later Showcase Cinemas) decided to cancel all screenings of 'Blue Story' and blame the violence on the film and the film's message. Further incidents also occurred during opening night, including a machete attack in Huddersfield. Many people in the crew including the cinematographer, composer and music producer all worked on 'Shiro's Story' (2018) with Rapman. Many of the cast also star in the Netflix series, 'Top Boy' (2011).