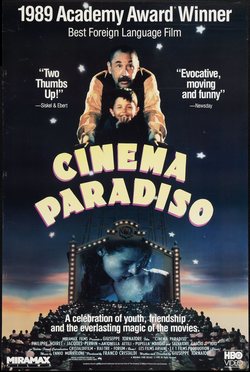 Salvatore is a successful film director. One day he receives a message that informs him that Alfredo has died, and then returns to his hometown, which for many years he wasn't going. As a child, and everyone knew him by Toto, whole days he spent in the cinema watching movies with his friend Alfredo, who was the projectionist film and had to suffer the censures to films imposed by the village priest, forcing him to cut that part of the celluloid. Salvatore reaches his hometown, where they invade the memories of everything that happened there 30 years ago, when he was a child taking his first steps in life. Remembering his friends with whom he played, he remembers his first love ... But above all remember the days in the projection room with Alfredo.

?
Write your own 'Cinema Paradiso' review.