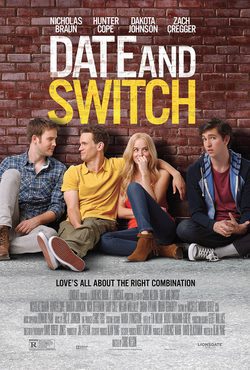 'Date and Switch' is a 2014 American comedy film directed by Chris Nelson and written by Alan Yang. Nicholas Braun, Hunter Cope, Dakota Johnson, and Zach Cregger are the main stars of this film. In 'Date and Switch', Braun will be Michael, and Cope will be Matty, two guys who make a pact to lose their virginity before prom find their friendship tested when one of them comes out of the closet. 'Gay Dude' was the working title of this comedy which is part of Lionsgate's ten "microbudget" projects, all produced for under $2 million.

?
Write your own 'Date and Switch' review.