Edge of the Axe 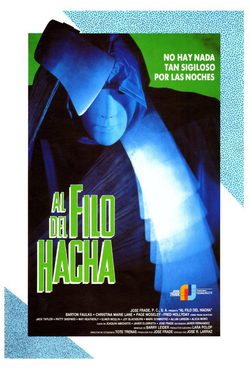 'Edge of the axe' is a horror movie co-produced between USA and Spain in 1988. Filmed in english between the citys of Madrid and Big Bear Lake (California, USA) and directed by the deceased catalan filmmaker José Ramón Larraz, plot is about a masked serial murderer is committing murders with an axe in a small town in the North of California. Unintentionally, a young couple will end in the middle of all the chaos, and eventually will become the next target of the murderer. Will they be able to catch him and reveal his identity? Or in the other hand the masked criminal away with it and annihilate the small population of the Californian suburb?

Cast Edge of the Axe

Reviews Edge of the Axe

?
Write your own 'Edge of the Axe' review.