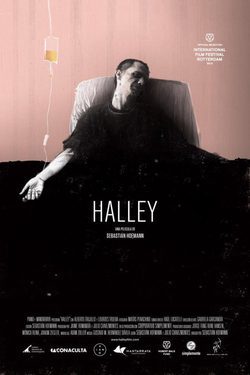 Sebastian Hoffman directs this terrorific film with Alberto Trujillo, Hugo Albores y Luly Trueba as mains stars of the film. In 'Halley' the main caracter is Alberto, who forms an unusual friendship with Luly, the manager of the 24-hour gym where he works as a night guard. 'Halley' has been in several film festivals incluiding Austin Fantastic Fest ,Sundance Film Festival and Vancouver International Film Festival. In spite of this it hasn't arrive to normal cinemas yet. This film is the first one on big screen of Sebastian Hoffman.

?
Write your own 'Halley' review.