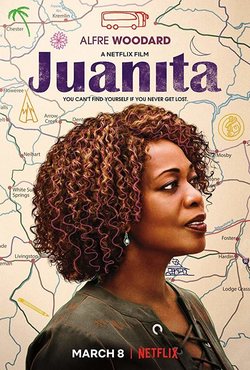 Based on the book 'Dancing on the Edge of the Roof' by Sheila Williams, 'Juanita' follows the history of a single mother who is tired of her stagnant routine. She works for $12,50 per hour doing the "dirty work" at a hospital in Columbus, Ohio, and has raised her three children on her own. Juanita (Alfre Woodard, '12 Years a Slave') worries for her children, with one being caught up in drugs dealing and addiction, her daughter getting pregnant with her first baby at 19, and her eldest, the supposed golden child, in jail. Her only release is her occasional romance read and ensuing sexual fantasy about Blair Underwood (who makes an appearance as himself), during which she is often interrupted. Juanita decides that she needs out of Columbus and she decides to buy a bus ticket to a random spot on a map (Butte, Montana). On the way, she meets truck-driver Peaches (Ashlie Atkinson, 'Mr. Robot'), who introduces her to the town of Paper Moon, Montana. Juanita also meets Jess Gardener ('Arctic Air'), a war veteran who now runs a French restaurant as head chef. Part romantic comedy, part a late-in-life coming-of-age story, 'Juanita' is directed by Clark Johnson ('Alpha House', 'Bosch') and adapted for the screen by Roderick M. Spencer ('Rituals'). Hide full plot... Show full plot 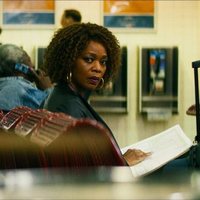 ?
Write your own 'Juanita' review.

All of the scenes set on Ohio and Montana were actually filmed in Virginia.