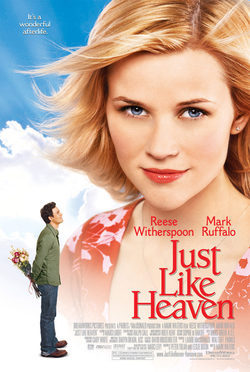 'Just Like Heaven' is a romantic comedia starred by Mark Ruffalo and Resse Witherspoon. David (Ruffalo) is a single boy that he moves to a small and cosy apartment to live alone and quiet as he always wants. However, his plans don't go as he expected. Suddenly one day, Elizabeth (Witherspoon), a dominant young that supports that she lives there and says the house is hers, appears in the house to surprise the boy. David thinks that this whole thing is a misunderstanding but the impediments that puts to Elizabeth will not be enough for she doesn't enter the house. David will have to discover that occurs with Elizabeth and that appears and disappears in such a mysterious way and try to live alone.

The wedding video David is watching when he first encounters Elizabeth is actually that of an assistant of one of the film makers. Except for about five days of photography, Reese Witherspoon was in the same outfit (red shirt, black suit) for the entire shoot. According to the DVD commentary, Elizabeth's apartment rooftop was completely built on stage with CGI for the San Francisco skyline.