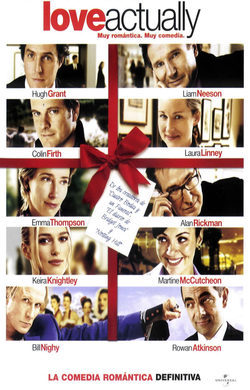 'Love Actually' is a film of intertwining love stories between a group of individuals. Set in London during the lead up to Christmas, it shows the stories of eight couples love stories and the frantic events that occur as they prepare for the magic festive period. With a star-studded cast, the films message is that "Love actually is all around" wherever we look. The characters involved in the love stories include the Prime Minister, old rock stars, and even a Portuguese waitress that can only speak her language but manages to fall in love with an Englishman. The film, released in 2003, has a star studded cast with famous actors at every angle ranging from Hugh Grant, Kiera Knightley, Bill Nighy, Colin Firth, Emma Thompson, Alan Rickman and Rowan Atkinson. A brilliant festive film that will be bound to make you laugh.

?
Write your own 'Love Actually' review.