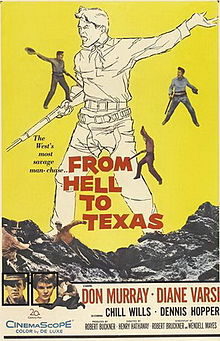 The naive cowboy Tod Lohman accidentally kills the son of the powerful land baron Hunter Boyd. Tod runs way in order to save his life, pursued by the dead man's vengeful brothers. Tod shelters on Amos Bradley's ranch, and he falls deeply in love with his daughter Juanita. However, Tod is concerned about one issue: Unfortunately, he will not have other option but to eventually leave the ranch, that has become his beloved home, when his pursuers catch up with him. Henry Hathaway directed this adaptation of 'The Hell-Bent Kid' novel written by Charles O. Locke to the big screen, with a script by Robert Buckner and Wendell Mayers. Starring Don Murray and Diane Varsi on the main roles and Chill Wills and Denis Hopper on supporting roles.

?
Write your own 'Manhunt' review.

According to myth, Dennis Hopper required 85 retakes for one scene, causing director Henry Hathaway to yell at him, "You'll never work in this town again!" and that it was ten years before Hopper obtained another major role. Don Murray recently confirmed that this never occurred, and in fact, Hopper worked steadily through the 1960s, including twice more with Hathaway: "The Sons of Katie Elder" in 1965 and "True Grit" in 1969.