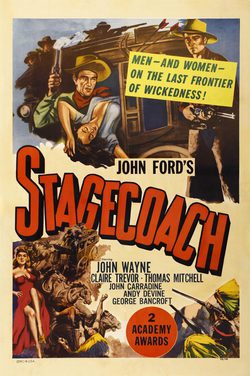 John Ford gets back behind the camera in a new adventure set in the West, starring Claire Trevor , John Wayne and John Carradine, among others. The story focuses on very different characters, as they embark on a long and dangerous journey in a stagecoach. The group is formed by a man outside the law , seeking revenge , a prostitute who have taken the village , a player, an alcoholic doctor, a pregnant wife of a soldier and a sheriff. Relations between them are difficult and stressful, not to mention that the attack will face a round of Apaches .

?
Write your own 'Stagecoach' review.