The face of Fu Manchu 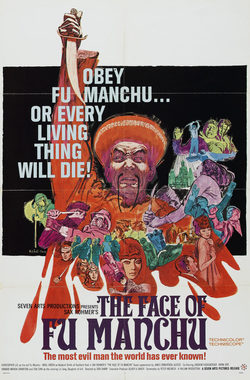 The world can breathe easier. Fu Manchu, the crimelord who knows the hidden powers of the mind, is dead. No less than Scotland Yard?s Nayland Smith witnessed the execution. But beware. Don?t expect Fu Manchu to die so conveniently when there?s still so much evil to perpetrate. Christopher Lee plays the malevolent anti hero of the popular Sax Rohmer novels for the first time in The Face of Fu Manchu. World domination is the ingenious fiend?s goal, one increasingly within his long-nailed grasp now that he?s discovered a secret potion so toxic that one drop can kill thousands. Pay heed, you Nayland Smiths of the world: The forces of evil are very much alive! Are you so foolish as to believe you can oppose the will of Fu Manchu?

Cast The face of Fu Manchu

Reviews The face of Fu Manchu

?
Write your own 'The face of Fu Manchu' review.