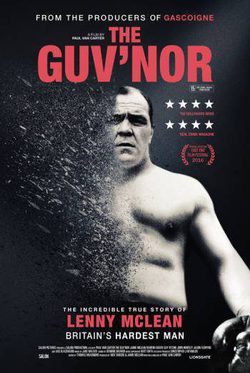 The documentary it´s about Lenny McLean's life shown through his only son Jamie. John Leonard Lenny McLean, better known as The Guv'nor was an english fighter, goalkeeper, criminal, businessman, escort and prisoner escort, weightlifter and even television presenter. All country called him as "the strongest man in Britain". The film go deeper into McLean's life, the most famous boxer of the 60. Before his death in 1998, the filmmaker Paul Van Carter followed his son Jamie to explore the true story of his father and his problematic childhood, physical abuse from his stepfather, his local fame and later fame in the all country. The story unites a variety of characters, legends of London and Hollywood figures as film director Guy Ritchie or actor Jason Flemyng. The film picks up the image of a ver complex man who has suffered all sorts of adventures during his career. Hide full plot... Show full plot

?
Write your own 'The Guv'nor' review.

The Documentary have images of Lenny McLean and his son Jamie. This one tells all the true story about his father. Lenny McLean better known as a Guv'nor started being famous in his neighbourhood and later he became in "the strongest man in Britain". In his childhood he was abused by his stepfather and then he became in the best boxer of his country.