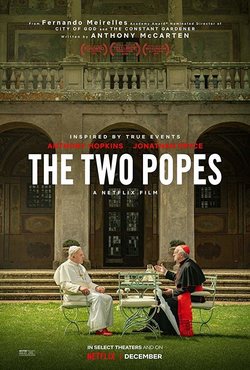 In the Vatican, the conservative Pope Benedict XVI (Anthony Hopkins, 'The Silence of the Lambs') and liberal pope-to-be Pope Francis (Jonathan Pryce, 'Tomorrow Never Dies') must put their differences behind them for the sake of the future of the Catholic Church. Before he was Pope Francis, he was Jorge Mario Bergoglio, an Argentinian Cardinal who had been involved with the church for years. Bergoglio travels to Pope Benedict XVI's summer residence in Rome for a few days, where the two discuss their very different perspectives on the future of the church. Whereas Pope Benedict XVI believes that the word of God is absolute and unchanging, and that the Catholic church should be more rather than less traditional, Bergoglio insists that one must immerse themselves in the lives of the less privileged and marginalised to truly carry out the work God wishes for them to do, and that reform is inevitable following the banking scandal and child abuse cases that the church had tried to quietly brush over. 'The Two Popes' follows these two opposing figures as they attempt to navigate conversations about theology, reform and tradition, as well as the future of the religion they have both dedicated their lives to. 'The Two Popes' is directed by Fernando Meirelles ('The Constant Gardener') and written by Anthony McCarten ('Bohemian Rhapsody'). Hide full plot... Show full plot 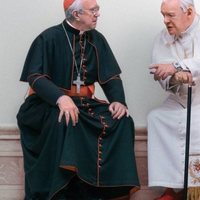 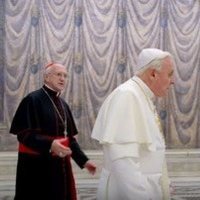 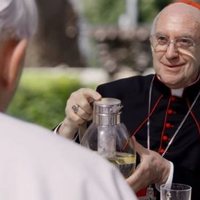 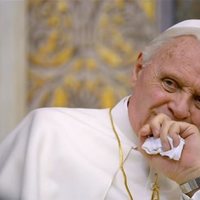 ?
Write your own 'The Two Popes' review.

Jonathan Pryce, on his physical resemblance to Pope Francis: "The day Pope Francis was declared Pope, the Internet was full of images of me and him, and 'Is Jonathan Pryce the Pope?' Even my son texted me, 'Dad are you the Pope?'"