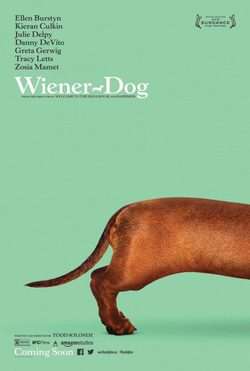 One wiener-dog. Four stories. The adorable dog will go through different homes, each one with its problems. On one lives Danny, who just gave his cancer-surviving son a pet. A vet saves the animal from being euthanized, and goes in a trip with a guy name Brandon that she randomly meets at the supermarket buying food for the dog. A scriptwriting teacher that is trying to produce his new screenplay welcomes the dog. Lastly a granddaughter gives her grandmother the dog so she stops being so negative about life. Todd Solondz returns to dark comedy with 'Weiner-Dog'. The famous 'Welcome to the Dollhouse' and 'Happiness' director presented his last movie at Sundance where it received generally positive reviews and was purchased by Amazon for its distribution. The film stars Julie Delpy, Greta Gerwig, Kieran Culkin, Danny DeVito, and Zosia Mamet.

?
Write your own 'Wiener-Dog' review.