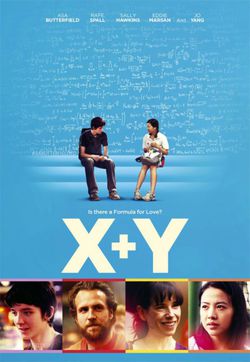 A 2014 BBC film directed by Morgan Matthews starring Asa Butterfield, Rafe Spall, and Sally Hawkins.'X+Y', inspired by 'Beautiful Young Minds', focuses on a teenage English mathematics prodigy named Nathan who has difficulty understanding people, but finds comfort in numbers. When he is chosen to represent Great Britain at the International Mathematical Olympiad, Nathan embarks on a journey in which he faces unexpected challenges, such as understanding the nature of love.The film premiered at the Toronto International Film Festival on 5 September 2014 and it had very good reviews.