'Charlie's Angels', the latest instalment revolving around the famous spy sisterhood with Kristen Stewart, Naomi Scott and Ella Balinska as its stars, hit UK cinemas on the 29th November. The person behind directing, producing and writing the action film, however, is none other than Elizabeth Banks of 'Pitch Perfect' fame. We were lucky enough to sit down and interview Banks about the ins and outs of her latest work, from real-life inspiration to her favourite day on set.

When it came to placing the Angels in a 2019 context, Banks found her inspiration in real women: "I was influenced a lot by real women doing law enforcement work or doing military work. Females that are Navy Seals, women that are NGO workers in really war-torn places...These women that put their own lives on the line all the time, and are very intelligent, thoughtful and intentional about why they're doing what they're doing". According to the actress, "I wanted them [the Angels] to feel distinct from the sort of superhero movies that we've been seeing women in". This isn't the first time that Banks has mentioned superheroes, with her comments about Wonder Woman and Captain Marvel receiving no small amount of criticism recently.

When it comes to the real-life women who could easily step into the role of a Charlie's Angel, Banks has few doubts. "Michelle Obama. I'm hoping that she's an angel!". In addition to the former First Lady, Banks states that several inspirational women are cited throughout the film. "We mention a lot of women in the movie...We were inspired by women like Malala [Yousafzai], Greta Thunberg...especially young women who are really standing up for what they believe in around the world". When asked about the men who have taken to complaining about Hollywood attempting to slot women into roles that they don't belong in, Banks points out that this is not a problem in her case because she's following the legacy and tradition of the earlier instalments in the franchise, all of which are centered around female protagonists. However, she does think that "there's plenty of amazing, incredible female-fronted stories to tell in the world and we should, hopefully, get to tell them".

Upon asking her about the on set experience, Banks points to one particular day on which they filmed a rooftop scene in Istanbul as her favourite memory of the shoot and confesses that she is very happy with how the film has turned out, despite having to cut five scenes which, she assures us, will be part of the DVD release: "I think the pacing of the movie works best the way it is now". Regarding the film's cast, the actress admits that the character of Sabina was written with Kristen Stewart in mind and that she predicts a bright future for newcomer Ella Balinska: "I think she's going to be the next great action superstar". 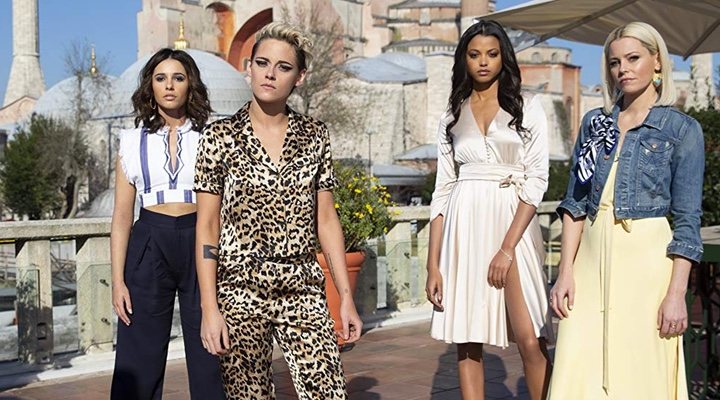 No longer a boys-only club

In 'Charlie's Angels', Sabina (Stewart) and Jane (Balinska) recruit Elena (Scott) as part of their secret, and now international, detective agency. After an intense training programme to get the new Angel up to speed, the three get down to the task of stopping an emerging villain who is armed with a new and cutting-edge breed of technology that threatens to destroy the world as we know it. 'Charlie's Angels' is showing in cinemas across the UK now.