'Stranger Things' drops the first teaser for season four and Hopper is back!

This is not a drill. 'Stranger Things', the now-iconic Netflix show steeped in 80s nostalgia and supernatural horror, just dropped the first trailer for its fourth season, titled 'From Russia with love'. In the trailer, we've moved beyond Hawkins and the big bad that was the demogorgon to the expansive landscapes of Russia, and the reason behind this sudden change of continent is the question on everyone's minds.

The third season's finale left us all completely devastated due to the death of Hopper. Our protagonists managed to thwart the attempts of the Russians to harness to power of the Upside Down, but their victory was not without its sacrifices as they had to set off an explosion that cost the life of the beloved sheriff of Hawkins, Jim Hopper...or did it?

To our surprise and delight, Hopper lives! In the short teaser, we catch a glimpse of the sheriff stood amongst dozens of others prisoners working on a railway network for the Russians. In a truly tragic twist, over the course of a single season Hopper has gone from the warmth and affection shared by the Hawkins crew to one of the coldest and most unforgivable climates on earth. For now, though, we're just happy he's alive.

Although we'll have to wait until the fifth season airs to discover exactly how it happened, we now know that Hopper did indeed survive the explosion. In a statement released alongside the short teaser, the creators of the series, Matt and Ross Duffer (often referred to as The Duffer Brothers), confirmed that the actor who plays Chief Jim Hopper, David Harbour, has not left the series and will be returning for season four. 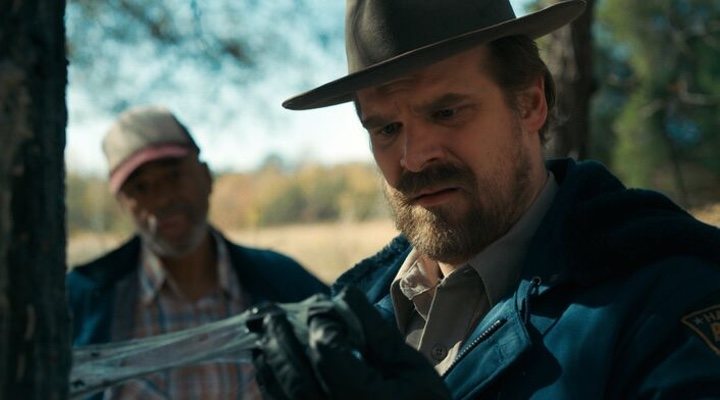 "We're excited to officially confirm that production on Stranger Things 4 is now underway -and even more excited to announce the return of Hopper. It's not all good news for our 'American'. He is imprisoned far from home in the snowy wasteland of Kamchatka, where he will face dangers both human ... and other. Meanwhile, back in the states, a new horror is beginning to surface, something long buried, something that connects everything ... Season four is shaping up to be the biggest and most frightening season yet, and we cannot wait for everyone to see more. In the meantime - pray for the American".