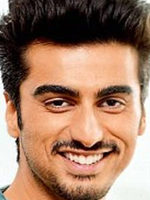 Arjun Kapoor is a well-known hindi-actor in the Bollywood industry. He is in fact the son of movie producers Boney Kapoor and Mona Shourie Kapoor. Also, his father is the nephew of Bollywood actors Anil Kapoor and Sanjay Kapoor. And adding to this list, he is also the stepson from the actress Sridevi and the stepbrother from the actress Jhanvi Kapoor.

Arjun Kapoor has been active for 5 years, participating in 6 movies that average a 2.7/10 score.