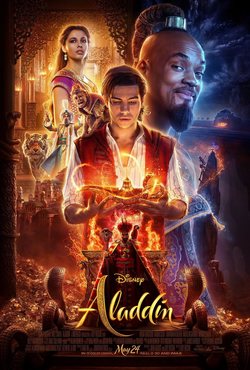 Guy Ritchie directs this live-action adaptation of a beloved Disney animated classic. Aladdin (Mena Massoud) is a street-urchin who regularly steals food to survive with the help of his faithful pet monkey, Abu. When Aladdin witnesses a young woman berated by the Royal Guards for trying to feed children without paying, he steps in and flees. The girl tells Aladdin that her name is Dalia and that she is the handmaiden to the Princess of Agrabah, though it in fact Princess Jasmine (Naomi Scott) herself in disguise. Meanwhile, the Sultan's (Navid Negahban) most trusted advisor, Jafar (Marwan Kenzari), is planning on seizing power with the help of a Magic Lamp hidden in the Cave of Wonders which only a Diamond in the Rough may enter. Jafar convinces Aladdin to attempt to retrieve the lamp. When Abu tries to seize a ruby, the cave begins to crumble and the two are trapped and betrayed by Jafar. The lamp reveals itself to hold a Genie (Will Smith), who offers to grant Aladdin three wishes. Still enchanted by the girl, whom he has since realised was Princess Jasmine, Genie transforms Aladdin into Prince Ali so he can attempt to win the Princess's hand. This remake of a Disney classic includes original music, such as Princess Jasmine's solo 'Speechless'. Hide full plot... Show full plot

Guy Ritchie ('Aladdin'): "The problem is there wasn't enough Genie in the trailer"

'Aladdin': 'I wish to become a prince' Exclusive clip 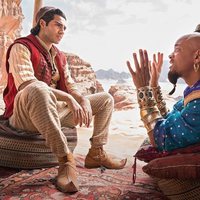 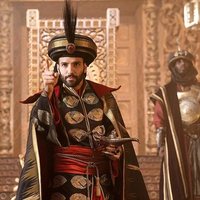 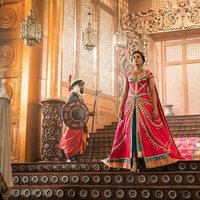 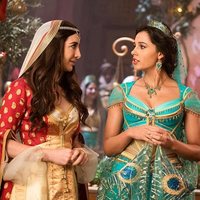 ?
Write your own 'Aladdin' review.

Guy Ritchie was primarily interested in doing the film because it was the Disney story he was closest to: "My stories are really about street hustlers. That's what I know how to do. And Aladdin is a classic street hustler who makes good". When Aladdin and Genie are first speaking in the desert, Carpet can be seen in the background making a sand castle in the form of the Disney logo castle. Mena Massoud was born a year before Aladdín (1992) and Naomi Scott was born a year after it.