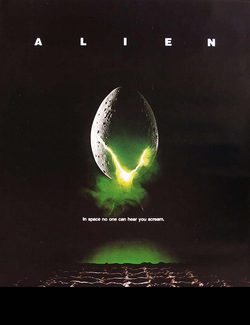 A chilling adventure will take place on the spaceship "Nostromo". Seven astronauts. Five men and two women, are the protagonists. Returning to Earth after a recognition space flight, the onboard computer receives a message from an unknown source, who comes from a seemingly uninhabited planet that will totally change the course of return. Upon landing necessarily to repair the machine, the crew awakens from cryogenic sleep in which they were. At first they think they are close to the ground, but soon discover they are even outside the solar system. There detected a strange way of life that will get introduced into the ship. Just upload the eighth passenger. It is then when it begins a terrible nightmare, impossible to imagine.

?
Write your own 'Alien' review.