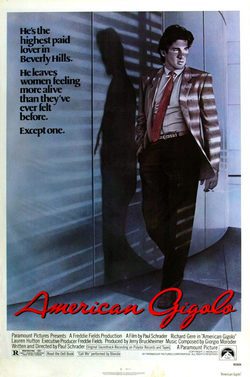 High-living prostitute Julian Kay has it all: the Mercedes, the clothes, access to Beverly Hills' swankiest establishments, and a stable of rich, older female clients. But it all falls apart after he does a favor for his former pimp and the trick turns up dead a short while later; Julian's actual client won't give him an alibi, and police detective Sunday doesn't believe the gigolo's denials. The one person who can help him is frustrated politician's wife (and sole non-paying bedmate) Michelle, if only Julian could let down his defenses and accept her gesture of love.

?
Write your own 'American Gigolo' review.