Anne of the Indies 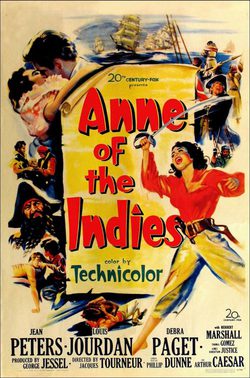 Jacques Tourneur in 1951 led to the big screen the life of Anne Bonny, a bootleg legend has made over the years. The film focuses on the captain Providence, feared in the seven seas, people don't know the best pirate of the pirates is a woman. During capture of a ship, Providence recruits LaRochelle, a former captain. What is not known is that LaRochelle works as a spy to recover his welfare and home, to return to his wife. Finally, Providence and LaRochelle fall in love and live a love story, but the captain soon will realize that his intention is betraying her with the British. Betrayed and brokenhearted, Providence hesitate to take her vengeance, abducting LaRochelle what he value the most: his wife. It will begin a bitter war, where love goes to the background.

Cast Anne of the Indies

Reviews Anne of the Indies

?
Write your own 'Anne of the Indies' review.