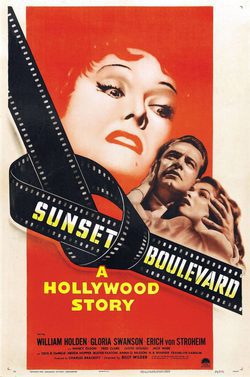 Joe Gillis is a writer who tries to live as scriptwriter without much success. It has sold some scripts but lately not getting off and has no money, so they will take the car the he loves so much. When the creditors come to take it off, he claims that the car is not there and then, he escapes with it. Then, Joe discover an abandoned mansion where to hide until he gets the money to keep the car. However, the mansion is not abandoned, there live Norma Desmond and his butler. Norma is a silent film hollywood star that doesn't work in so long. Far from being offended, Norma sees the arrival of Joe as a sign. She is writing a script and wants jJoe to sell proofread. Standard course would be the protagonist of the film, which expects to carry back to being a movie star again.

?
Write your own 'Sunset Boulevard' review.