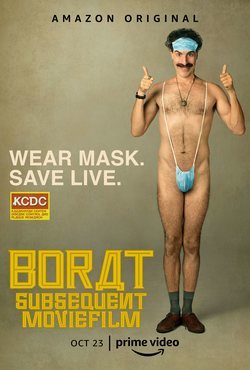 In 2006 the world met a journalist from Kazakhstan named Borat, and we haven't been able to forget him. That's why, in his second trip to the United States, the character created and played by Sacha Baron Cohen will be forced to go undercover to gather more information from the "American regime" during the coronavirus pandemic. Besides living with some radical conservatives during quarantine and attending the Republican Congress dressed as Donald Trump, he will be joined by his sister, whom he wants to bring to vicepresident Mike Pence. Sacha Baron Cohen is back in 'Borat Subsequent Moviefilm: Delivery of Prodigious Bribe to American Regime for Make Benefit Once Glorious Nation of Kazakhstan', the sequel of the succesful 'Borat'. He filmed it in secret during the first months of the COVID-19 pandemic. Among Borat's "victims" we will find Mike Pence, Rudy Giuliani, former mayor of New York, and late Jeffrey Epstein and his connections with Donald Trump. Sacha Baron Cohen had to wear sometimes antibullet vest for his security. The movie will debut in Amazon Prime Video in more than 240 countries just in time for the presidential elections in the United States.