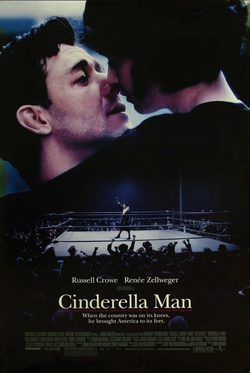 In a time when America needed a champion, an unlikely hero would arise, proving how hard a man would fight to win a second chance for his family and himself. Suddenly thrust into the national spotlight, boxer Jim Braddock would defy the odds against him and stun the world with one of the greatest comebacks in history. At the start of the 1930s, this unhappy former boxer felt exactly like every other American did at the time. He felt useless, broken down and out of luck. His career seemed to have ended, and now the only thing that mattered to him was his family. Driven by love for his family, he forced himself for the one final time into the ring. The American filled with more determination than ever set out to be the champion he always dreamed to be. This normal citizen was to become one of the most surprising sporting legends in history.

?
Write your own 'Cinderella Man' review.