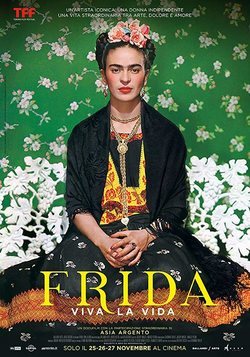 The Italian actress and director Asia Argento hosts this documentary that aims to help viewers uncover the different sides to the iconic painter, following a narrative thread that consists of the words of Frida herself drawn from letters, diaries and private confessions. The viewer will discover how the painter's work is rooted in the traditional painting of the nineteenth century, in the Mexican 'altarpieces', as well as in the art and commitment of the men of his time, from her life partner, Diego Rivera, to the revolutionary Trotsky. Thanks to her painting, but also to her writing and her unmistakable style, over the years Kahlo has become a role model that has influenced artists, musicians and designers around the world. In fact, today she is one of the greatest icons not only of art but of culture in general due to her modern, unabashed attitude that she maintained even in the face of personal difficulties. With this documentary, director Giovanni Troilo will offer a new perspective on the well-known artist Frida Kahlo, one of the most important and relevant painters of the entire twentieth century, with a personality as controversial as necessary at a time when the art was still a "men's thing". This short documentary has been shot mainly in Spanish, Frida's mother tongue.