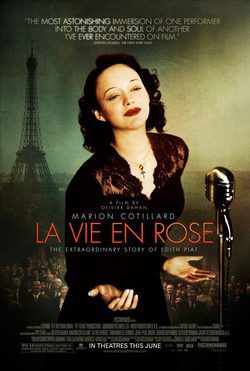 Piaf grew up in difficult circumstances, living at times with her mother, an alcoholic street singer; her father, a circus performer; and a grandmother, a madam at a brothel. A 20-year-old street singer, she is discovered by a club owner who is soon murdered, and coached by a musician who brings her to concert halls. Her rise to fame after that was fast, and her constant companions were alcohol and heartache. The tragedies of a love affair with Marcel Cerdan and the death of her only child belie the words of one of her signature songs, "Non, je ne regrette rien" (translated: "No, I regret nothing").