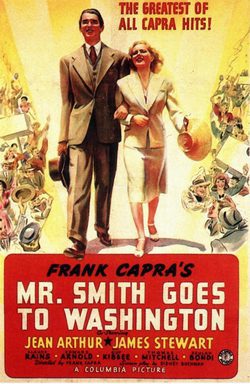 Political power-brokers decide that Jefferson Smith, an obscure scoutmaster in a small town, would be the perfect dupe to fill a vacant U.S. Senate chair, assuming he would be easily controlled by the senior state senator. Stewart's wide-eyed wonderment at the glories of Washington feels like an act to his cynical secretary, who doesn't believe for a minute this overgrown boyscout could be for real. But he is. Congress didn't appreciate the portrayal of their august body as being cynical, corrupt and absorbed by their own self-interest, but audiences sure did.

?
Write your own 'Mr. Smith Goes to Washington' review.