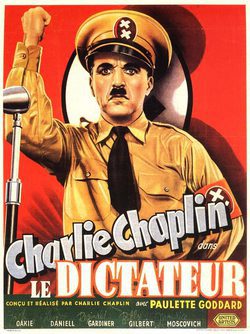 A Jewish barber is wounded in World War I. Its aftermath will produce amnesia and when he finally leaves the hospital a few decades later realizes that his country, Tomania, is led by the evil dictator Adenoid Hynkel, who yearns to conquer the world and also attentive unjustifiably against the integrity of the people Jewish, and blamed for the bad situation that is crossing the country. The barber, unaware of the rise of Hynkel to the power and his politics, do not understand when the forces of assault painted the word "Jew" in his barbershop, and when he recriminates it, they begin to curse him violently, then Hannah, a girl who also lives in the ghetto, defends the barber. Both fall in love and must suffer the abuses of the dictatorship. However, one day, the members of the dictator's army, confused Hynkel with a Jew and sent him to a concentration camp. Meanwhile, the barber is also confused with the dictator. Hide full plot... Show full plot

?
Write your own 'The Great Dictator' review.