Once upon a time in America 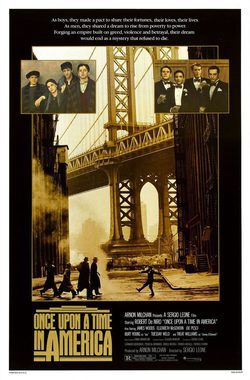 David Aaronson, also known as "noodles", is a former New York gangster who lives in another city with a false identity. David returns to the city where he grew up years after having had to flee. Once in New York, is assailed by memories of when he lived there, and how he formed his band with Max, Patsy, Dominic and Cockeye when they were children. The band thrives quickly, but the man for who they did the work before forming the band is persecuting them. Especially they succeeded during the famous US dry law. Latest film by Italian director Sergio Leone. Robert de Niro gets back into the skin of a mobster. The film has different versions. An original version of 322 minutes was reduced to 270. US version it premiered lasted 139.

Cast Once upon a time in America

Reviews Once upon a time in America

?
Write your own 'Once upon a time in America' review.