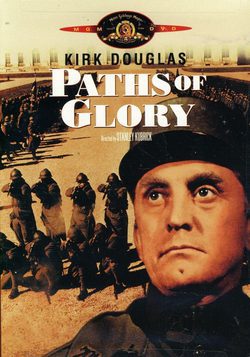 Adapting Humphrey Cobb's novel to the screen, director Stanley Kubrick and his collaborators Calder Willingham and Jim Thompson set out to make a devastating anti-war statement, and they succeeded above and beyond the call of duty. In the third year of World War I, the erudite but morally bankrupt French general Broulard (Adolphe Menjou) orders his troops to seize the heavily fortified "Ant Hill" from the Germans. General Mireau (George MacReady) knows that this action will be suicidal, but he will sacrifice his men to enhance his own reputation. Against his better judgment, Colonel Dax (Kirk Douglas) leads the charge, and the results are appalling. When, after witnessing the slaughter of their comrades, a handful of the French troops refuse to leave the trenches, Mireau very nearly orders the artillery to fire on his own men. Still smarting from the defeat, Mireau cannot admit to himself that the attack was a bad idea from the outset: he convinces himself that loss of Ant Hill was due to the cowardice of his men.

?
Write your own 'Paths of Glory' review.