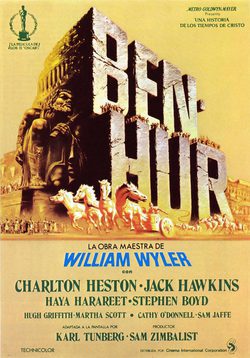 During Jerusalem's roman occupation, Juda Ben-Hur (Charlton Heston), a young man from a noble jewish family, is accused of trying to kill a governor, then he is sentenced by a young roman commander that he treated as a friend, Messala (Stepehn Boyd), to work as a slave in the galleys. After that, Ben-Hur will only be focused in revenge. This adaptation of the Lewis Wallace's novel of the same name, 'Ben-Hur' is one of the most iconic films of the history of film, and it is still one of the most succesful movies in the Oscars, after winning the record figure of eleven statuettes.

?
Write your own 'Ben-Hur' review.