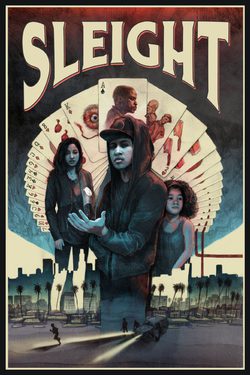 After his mothers death, a young street Magician, Bo, played by Jacob Latimore (The Maze Runner), finds himself caring for his little sister, Tina, played by Storm Reid (Twelve Years a Slave), and trying to make some extra money, decides to start selling drugs outside parties. However, after an incident where he gets in trouble with his supplier, his little sister is kidnapped. Now, Bo must rely on his cunning, wit, and sleight of hand to find those responsible and rescue his sister. Also starring Seychelle Gabriel as Holly, Dulé Hill as Angelo, Sasheer Zamata as Georgi, Michael Villar as Packy, Brandon Johnson as Ramone and Cameron Esposito as Luna.

?
Write your own 'Sleight' review.

The rights to the film has been purchased by WWE films