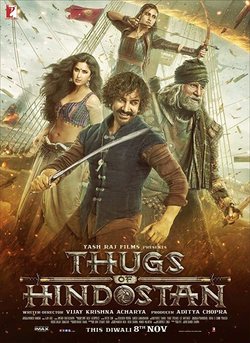 In 1795 the East India Company rules over Hidostan (India). But a group of rebel pirates lead by Khudabaksh Azaad (Amitabh Bachchan) are set to free their country from the British Empire. Dealing with this situation, John Clive (Lloyd Owen), the British Commander, sends Firangi Mallah (Aamir Khan), a small time pirate from Awadh, on a mission, to infiltrate on the rebel group so that they can end this threat from the inside.

?
Write your own 'Thugs of Hindostan' review.