Why Don't You Just Die 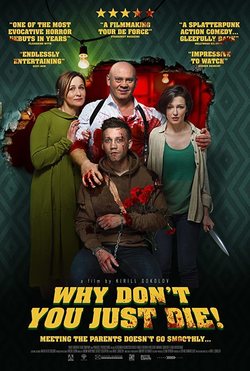 Matvey (Aleksandr Kuznetsov, 'Great Poetry', 'Better Than Us') has a singular objective in mind: to kill Andrey Gennadievitch (Vitaliy Khaev, 'Playing the Victim', 'How I Became Russian'), and brutally. Andrey's daughter, Olya (Evgeniya Kregzhde, 'Pushkin Hills', 'The Geographer Drank His Globe Away'), has confessed to Matvey about her father's horrific acts of violence towards her and also the fact that he keeps large stashes of money in their apartment building. These two pieces of information has led Matvey to form a simple plan: kill Andrey and take the money. When Matvey arrives, however, his plan is complicated when Andrey reveals that he is a corrupt police detective who is aware both of Matvey's thuggish reputation and his relationship with Olya. As more and more people arrive at Andrey's apartment, Matvey starts to realise that there are more players and more pieces to this twisted puzzle than he ever knew. 'Why Don't You Just Die' is a black comedy written and directed by Kirill Sokolov ('Sisyphus is happy', 'The Outcome'). Joining the cast are Michael Gor ('Bridge of Spies', 'Hunter Killer'), Elena Shevchenko ('Sympathy Seeker', 'Black and White'), Igor Grabuzov ('The Ninth', 'Psychedelic Breakfast') and Aleksandr Domogarov ('Palma', 'Pechorin'). Hide full plot... Show full plot

'Why Don't You Just Die' Trailer