'The Walking Dead', the zombified cult classic that has dominated our screens for the past nine years, has been declared one of the most influential television shows of the decade by TV Guide. As the 2010s race to their close fast enough to leave us all with whiplash, TV Guide considers how critically-acclaimed series as varied as 'Arrow', 'Game of Thrones' and, of course, 'The Walking Dead' have impacted not just its loyal viewers, but also the format and culture of television broadcasting itself. 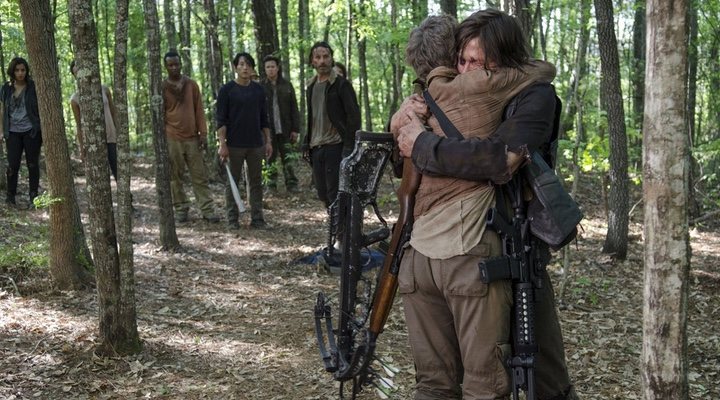 'The Walking Dead' combines impressive viewing rates, with the Season 5 premiere 'No Sanctuary' standing as the most watched episode in the history of cable television, with an ever-evolving franchise that promises what is perhaps the brightest future that a zombie apocalypse has ever seen. Whilst 'The Walking Dead' ripple effect can be seen in the slew of series such as 'Preacher' and 'Z Nation' that went on to incorporate comic-book and zombie narratives, as Comic Book notes, it is the impact of 'The Walking Dead' upon the consumerist phenomenon of franchises that secures its place as one of the most influential series of the decade. The spinoff series, 'Fear the Walking Dead', premiered in 2015 and a third series is set to air in the spring of 2020. In addition to the multiple series, video-games and books released within 'The Walking Dead' universe, the show is so popular amongst fans that it has prompted a live aftershow, 'Talking Dead'. The aftershow regularly garnered as much as 7 million views per episode, with such success leading to many other series following suit, with 'Breaking Bad' coining 'Talking Bad' and 'Better Call Saul' launching 'Talking Saul', to provide superfans with an extra expert insight into the making of their beloved franchises.

"As a consumer...we want that stuff," explains showrunner Scott Gimple when asked by The Hollywood Reporter why every expansion of 'The Walking Dead' universe is met with such enthusiasm by fans. "We're consuming things very differently. Everybody essentially has their own video store now". Indeed, in addition to his role as showrunner, Gimple has been named Chief Content Officer to 'The Walking Dead', a title which serves to emphasise how the series functions not only as a television show, but as a brand. In a world in which streaming means, as Gimple suggests, that ever viewer has their own video store, constantly expanding series such as 'The Walking Dead' keep those stores fully stocked.

Rounding off the TV Guide list are 'Game of Thrones', 'House of Cards', 'Making a Murderer', 'Girls', 'Arrow' and 'American Horror Story'. Though TV Guide admits that 'The Walking Dead' may not have impacted the content of television as much as shows such as 'Making a Murderer' did with the resurgence of the true crime genre or 'Girls' with the call to represent the millennial experience, it revolutionised the concept of a franchise in a way that means that the series shows no sign of stopping, even as the decade draws to a close.

What's next for 'The Walking Dead'?

The zombie apocalypse certainly isn't over yet. The new series set to launch in 2020 alongside 'The Walking Dead' and 'Fear the Walking Dead' means that the network AMC will only have 10 weeks of the coming year during which no content from the franchise is broadcasted. On top of this, fans were equal parts intrigued and overjoyed to hear that a trilogy of films following Andrew Lincoln's Rick Grimes are in the works and intend to see the universe expand to cover "other worlds". Scott Gimple has also teased fans with talk of miniseries and specials to add to this abundance of TWD content coming our way in 2020. With plans for the future of the franchise more ambitious than ever, perhaps in ten years time we can expect to see 'The Walking Dead' on a list of the most influential shows of the 2020s, too.