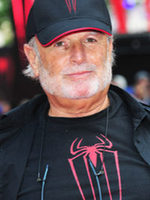 He born in Israel, and his parents were survivors of the Holocaust. Since he was a child, he showed interested by the superheroes. He did the military service and was in Six-Day War. After of that, he finished his service in the Israel Defense Forces and moves to United States, where he started to study, after some events, Business Administration. After of that, with the pass of the time, he became in CEO of Toy Biz and CEO and producer of Marvel Entertainment.

Avi Arad has been active for 23 years, participating in 24 movies that average a 6.3/10 score.

Ghost in the Shell