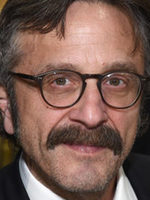 Marcus David Maron is an American comedian, podcaster, writer and actor. For 15 years he has been writing and performing honest and provoking comedy for radio, television and stage. He has appeared in HBO, he has been a frequent guest on 'The Late Show with David Letterman' and the same with 'Late Night with Conan O'Brien'. From 2013 to 2016 he has starred in his own show 'Maron' being a executive producer and a occsaional writer. In 2017 he joined the 'Glow' cast.

Marc Maron has been active for 2 years, participating in 3 movies that average a 7.1/10 score.