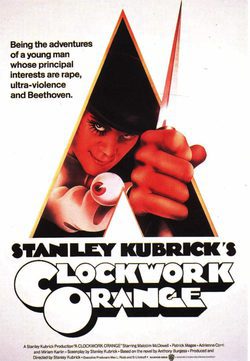 The adventures of a young man whose principal interests are rape, ultra-violence and Beethoven. Alex is the leader of the gang of droogs, which have their own ways to have fun and unload their tremendous aggressiveness, either beating up a beggar or entering a house to destroy what's inside and rape the woman living there. However, when one of these bouts of violence becomes murder. Alex is arrested and voluntarily submitted to an innovative treatment able to eliminate their violent instincts. The action takes place in Britain in the future, but don't known exactly when. One of the most famous and beloved films of Stanley Kubrick, based on Anthony Burgess's novel with the same name.

?
Write your own 'A Clockwork Orange' review.