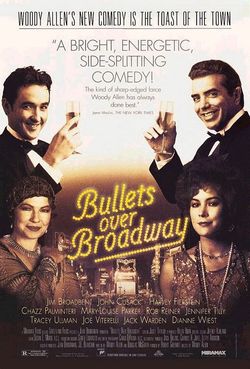 David Shayne, an idealistic young writer who'll do anything to get his first Broadway play off the ground -- even if it means teaming up with the mob! Surrounded by a wacky cast of characters including a gangster's ditzy girlfriend, a tipsy actress, and a mob hit man, Shayne's got to pull it all off before the curtain falls and bullets start to fly!

?
Write your own 'Bullets Over Broadway' review.