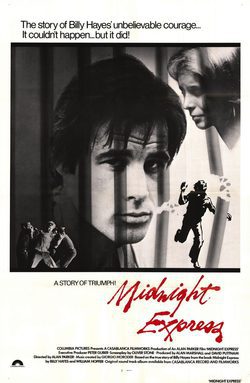 With the Turkish government trying to crack down on drugs, terrorism and crime, Billy Hayes has the misfortune of being caught at the border with a hashish stash. At first sentenced to four years and two months for drug possession, his prison term grows to 30 years when the prosecution?s appeal finds him guilty of smuggling. Pleas from his parents, litigation from his lawyer and actions from the U.S. Embassy amount to nothing. Things get worse when Hayes is sent to a detention center for the mentally unstable after he bites off a warden?s tongue to prevent him from divulging his escape plans. Forced to struggle with daily violence, despair and abuse, he finally reaches his breaking point and is willing to do anything to escape. Knowing that he is on his own, Hayes has one risk left to take: riding his own Midnight Express.

?
Write your own 'Midnight Express' review.