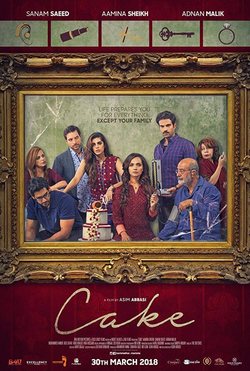 'Cake', the coproduction between Pakistan and the United Kingdom is the cinematic debut of the filmmaker Asim Abbasi, who also writes the script of the film and have received an award in the UK Asian Film Festival for his work. This film works with universal themes like the love and loss, the decision making and the responsabilities. It all stars when the patriarch of the Jamali family is taken ill and his daughter Zareen, his eldest daughter and the one who takes care of him, is forced to reconnect with her sister Zara when she returns from London. The Paki film is produced by Indus Talkies and ZAB Films, and counts among its cast with the actors Sanam Saeed, Aamina Sheikh and Adnan Malik.