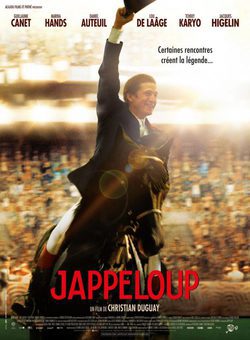 At the beginning of the 1980s, abandoning a promising career as a lawyer, Pierre Durand devotes himself, body and soul, to his passion: show jumping. Supported by his father, he invests everything in a young horse called Jappeloup, even though no one else Pierre has made a good choice. Too small, too temperamental, and too unpredictable, the horse has many flaws but also has remarkable poise and abilities. From competition to competition, horse and rider progress and impose themselves in thehorse-riding world. But the Olympic Games in Los Angeles are a terrible failure and Pierre becomes aware of his weaknesses. With help from Nadia, his wife, and Raphaëlle, Jappeloup's groom, Pierre wins the horse's trust and builds a relationship which will lead them both to the Olympic Games in Seoul in 1988.

?
Write your own 'Jappeloup' review.