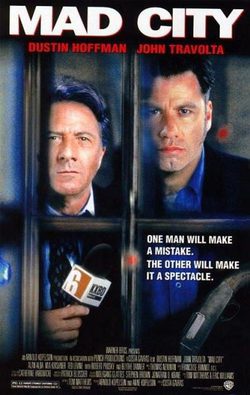 'Mad City' is one belonging to the drama genre, American film of 1997, directed by Costa Gavrar. The film is starring by John Travolta, Dustin Hoffman, Mia Kirshner, Alan Alda, Blythe Danner, Bill Nunn and Robert Prosky in the lead roles, while Larry King and Jay Leno has special appearances. The plot of the film revolves around a museum guard (Travolta) who has just been fired and, in a fit of nerves, he decides to kidnap a group of children in order to regain his job. Moreover, Max Bracknett a veteran reporter (Hoffman), which promised to be a star of communication before that got in his way the famous journalist Kevin Hollander, needs to regain lost prestige, so that advantage among the hostages to try to get the first chronicle of the event, at the same time acts as negotiator.

?
Write your own 'Mad City' review.