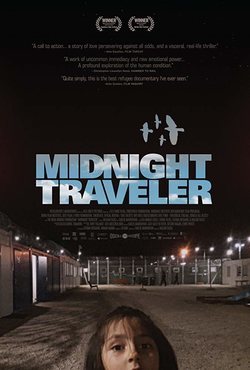 In 2015, Afghan director Hassan Fazili found himself in a dangerous situation when the Taliban put a price on his head and began to persecute him. Because of this, both he and his family are forced to leave for Europe to avoid any possible attack. This documentary following their odyssey, which lasts several years, is filmed collaboratively by Fazili himself, by his wife Fatima Hussaini and by his daughters Nargis and Zahra. Thanks to these recordings, they family are able to overcome some of the lowest points of their experiences in the different refugee camps through which they are be forced to pass. Their determination and survivalism in the face of such experiences shines a light on the spirit and the strength that the family has. 'Midnight Traveler' delves into the pain and suffering that they encounter on their journey in this documentary that considers terror, terrorism, and all victims who go through similar situations and are forced to leave their homes overnight. Fear, loneliness and abandonment are just a few of the many emotions that these people are wracked with daily whilst the Western world turns a blind eye to the distress requests they send. In a story designed to humanise these individual struggles, 'Midnight Traveler' also the love that exists within Fazili's family and how that becomes the key to overcoming the various adversities they encounter. Hide full plot... Show full plot

?
Write your own 'Midnight Traveler' review.